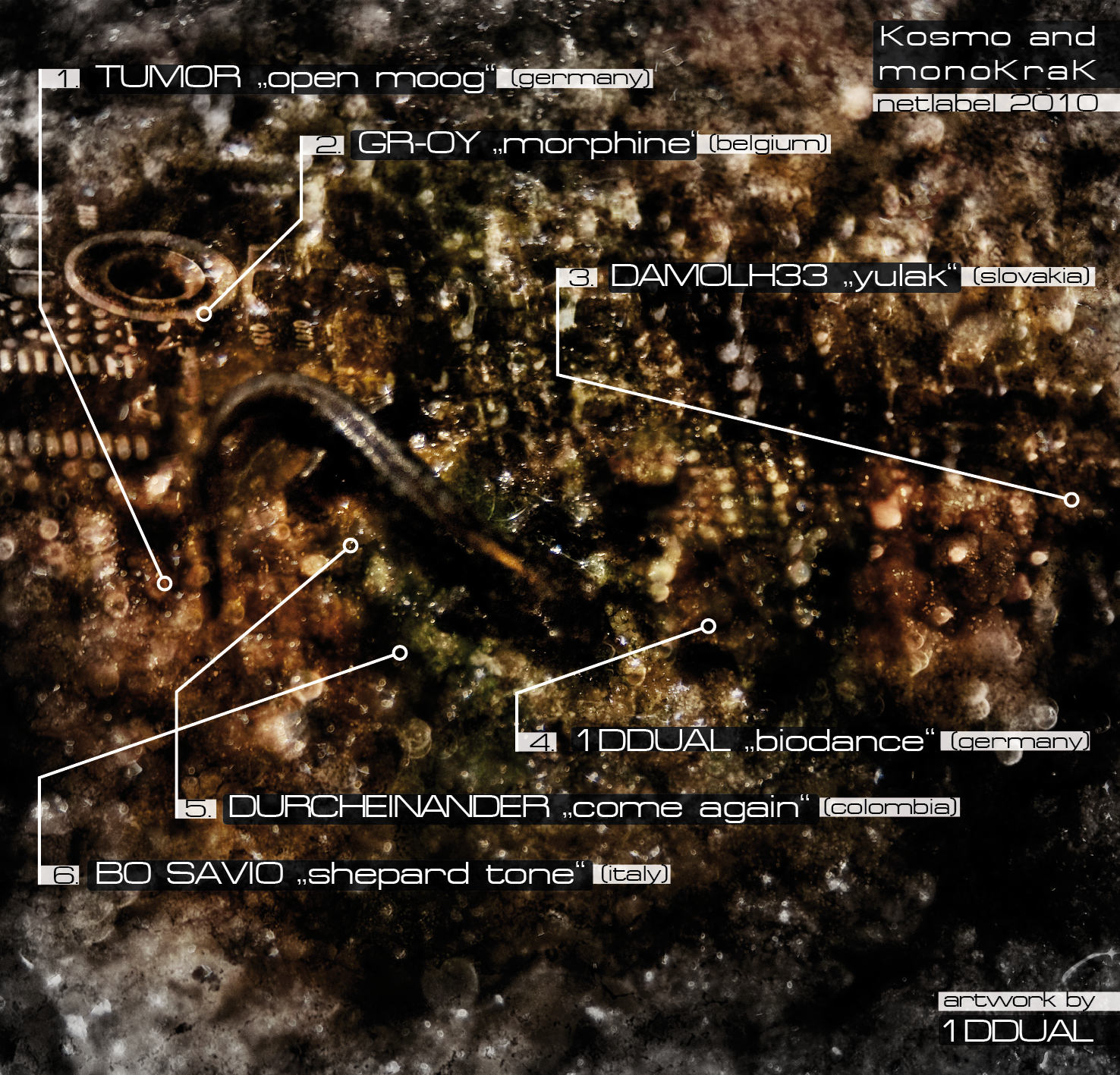 1ddual started making music when he was 12 years old. At that time, Fabian aka 1ddual played until his 17th birthday in various
punk / metal / emocore bands, the e-guitar, e-bass and percussion. The first releases were with the black metal band Nema (1993).
Later he played in lesser-known deep core bands too and oriented then more and more towards electronic music.
At 18, he started djing ambient and psytrance musik at small parties. Besides his own events he regularly attended parties in the electronic dance
music scene. For nearly 10 years he remained in the psy / progressive-trance scene faithfully and had more bookings as a Dj at underground events.
In 1999 he started the production of his first own tracks with synthesizer and computer (Atari+Cubase).
In 2006, after a short break due to work (fashion photography), he began studying photography and new media at an Art university (incl. sounddesign)
In this context, he and his girlfriend started with the audio-visual project: 2ddual. 2ddual audiovisual performance was focused on their own audio (deep-ambient)
and video material which were composed live. At the same time 2ddual were very busy as visual-performers in clubs and (film)festivals. This work was always
in direct contact with the music and has strongly influenced the current productions. After 3-5 years of intensive audiovisual work the duo split.
Since then Fabian (the leading part of the project)has been working alone in the field of audio and video production, photography and graphics under the name 1ddual.
Now his productions and dj-sets move mainly in the deep experimental minimal to psychedelic minimal area.
=======================================================================
Bo Savio:

William De Paolis (aka Bo Savio) was born in 1981 in a small city near Venice, in Italy. He has grown up in the digital age, using intuitive software programs like Reason and Ableton to spontaneously express ideas and emotions.
His teenage years were spent playing blues and rock guitar in bands but this always meant compromise and he needed something more than that â something that would allow a purer form of self expression. At the time it was hard to hear good dance music in Italy apart from one or two tracks that crossed over into the clubs he sometimes visited with friends but that was enough to whet his appetite and he immediately got wrapped up in the beats, connecting with the music on a deeper level. He started exploring the electronic medium and became fascinated by how some DJs could apply their own peronal vision to the music, elevating it to an art form. This was exactly the inspiration he needed and he was soon experimenting with loops on his laptop, and buying records ( Plus8, Perlon, Spectral and Minus).
His music has evolved to what it is today: elegant and dark minimal sound, a detailed groove manufactured with strange mad pieces and a visceral sound of low frequencies
========================================================================
Durcheinander:

GrÃ©gory Calay aka 'Gr-oy', born in Belgium and partly raised in Germany, is motivated by music and greatly interested in computer programs.
No wonder then that he quickly decided to put these two things together and electronic music became his real passion.
In early 2000âs GrÃ©gory started producing electronic music using Reason and Fruity Loops but then life intervened.
After a very long break, he seriously restarted his own productions in 2009 and this time using Ableton Live, VSTs, Plug-ins and many others.
His style can be defined as a mix between deep techno/house and dark down tempo.
As his major influences he lists artists and labels such as Thinner, Basic Channel, Swayzak, Ellen Allien, Sascha Funke, Luke Vibert, Kompakt, Dessous Recordings, Warp, Massive Attack,...
=======================================================================
TUMOR:

Jan GÃ¤rtner aka Tumor was born on 28th April, 1993 in Gelnhausen (Germany).
In the age of nine he started to gather some musical basics in the table music.
Four years later he discovered electronic music und started to experiment.
In the early days inspired by artists like Stephan Bodzin, Marc Romboy and Gregor Tresher he developed his own genre which consists of elements from Neotrance to Deep Minimal.

Uploaded by KOSMO NETLABEL on December 22, 2010